No other manufacturer of gaming mice has such a huge product portfolio like Logitech: after the typical “Logitech G…” you’ll find many cryptic number combinations like 402, 700 or 303 – and at this point you kind of wish having the old days back when Logitech’s MX518 was THE gaming mice to buy from Logitech.

Legendary mice need legendary successors – and that’s where the numbers “502” come in. The Logitech G502 Proteus is Logitech’s current flagship gaming mouse with plenty of promising features. Even on reddit there is a subreddit about the “G502 Master Race“, where fans talk about how awesome they and their mouse are.
Can the futuristic G502 match the legendary status of the MX518? Let’s find out in my Logitech G502 Review (yaaay)! 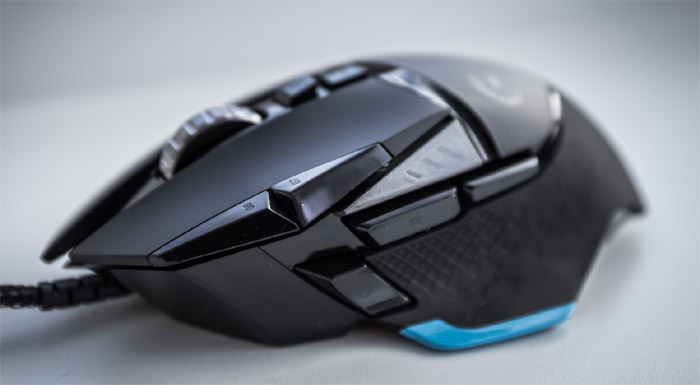 No other top gaming mouse combines so many different materials: Hard plastic with a pretty good grip feel as the main material (including a triangle pattern on the sides for more grip), gloss plastic for the side buttons and the case, as well as metal for the mouse wheel. Only the bottom of the mouse doesn’t have an “op” feel to it: the glides (which is the part that actually touches the mouse pad) are kinda hard – which doesn’t resonate that well with hard mouse pads like the SteelSeries 9HD. That’s why I’d always recommend soft cloth mouse pads for the G502. 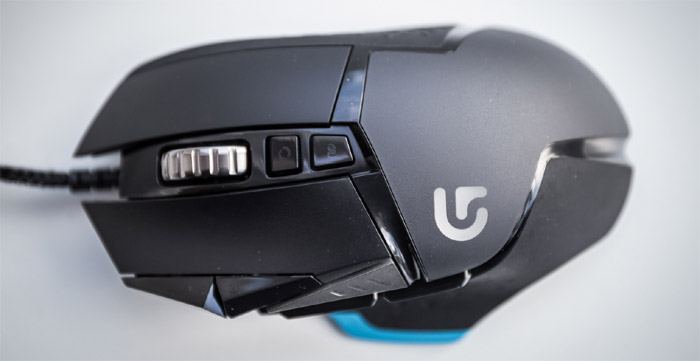 Despite having such a futuristic, edgy design the G502 fits your hand like the proverbial glove. It offers a good mixture between the classical, symmetric shape of the SteelSeries Sensei and the bulkier, asymmetric Deathadder shape. That’s why it’s especially nice for palm grip users as the hand rests perfectly on the back of the mouse. The G502 is on the heavier side though, even without the added weights. If you’re used to lighter gaming mice you might need some time to adjust.

Despite having a s***load of mouse buttons, the ergonomics are still super good: both thumb buttons at the left side are easy to reach because of their sheer size, especially compared to other mice (e.g. Zowie FK1, Xtrfy XG-M2) with way smaller buttons. I’m also very impressed by the idea of having two additional mouse buttons right next to the left mouse button. These buttons (G7 & G8) are very easy to reach and come in pretty handy in a lot of games – I’m actually asking myself why no other manufacturer had this idea earlier. I’m not a huge fan of the G9 button behind the scroll wheel though, as it is way too far at the center of the mouse and pressing it requires you to lift off your hand.

We’re kind of torn here: on the one hand it’s always good to use high-quality materials (like metal in this case). We also like the feature that you can tip the wheel to the left and right, so you’ll have two additional mouse buttons. And on top of that, you can “un-block” the mouse wheel to have a seamless scrolling mode.

On the other hand though this results in a very “wobbly” feel of the mouse wheel: because of all the metal it’s pretty heavy which generates some kind of an imbalance. Metal is also quite slippery, which might make you lose some grip. Plus, it’s pretty loud when used. All this leads to at least some minor(!) drawbacks when it comes to the quality of design.

A big plus in our Logitech G502 review: Logitech’s “Gaming Software” allows you to perform a multitude of individual modifications to your mouse and (on top of that) has a super well-made user interface and design. You can create different profiles, set up your own dpi values (in increments of 50dpi), program macros and adjust the mouse to certain mouse pad profiles. A nice little gimmick are the included “heatmaps” you can create as they track which buttons you use the most and determines your “clicks-per-minute“. Especially when it comes to software, Logitech just knows how to deliver. 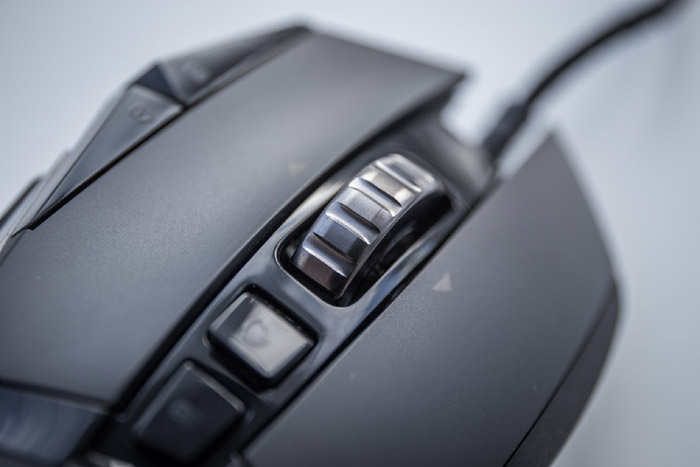 I’ve used two games in my Logitech G502 Review: League of Legends and the Unreal Tournament 4 Alpha. Knowing the quality of the sensor you can obviously expect perfect flawless tracking in both games, with the lowest latency you can get. The most outstanding feature though is how you well you can make use of all the mouse buttons: while many other mice have 7+ mouse buttons, you can very often not really use them properly. That’s the only thing I dislike about the Zowie FK1 – the side buttons are just too small.

This is way better with the G502: the side buttons are not only bigger and easier to use, but especially the buttons “G7” & “G8” near the left mouse button are fantastic to use in plenty of games. In Unreal Tournament I’ve used them to switch to my favorite weapons (Sniper / Shock Rifle) as they are perfectly accessible for your index finger. You could also think about using them for different grenades in CS:GO, or active items (Zhonyas) in League of Legends.

After exchanging my SteelSeries 9HD mouse pad for a Logitech G240 cloth one, the G502 slides perfectly smooth across its surface. As said, the mouse is a bit on the heavier side – which is why I haven’t used the included extra weights. Using them is super easy though as you just have to open the bottom of the mouse via a magnet – no tools needed! 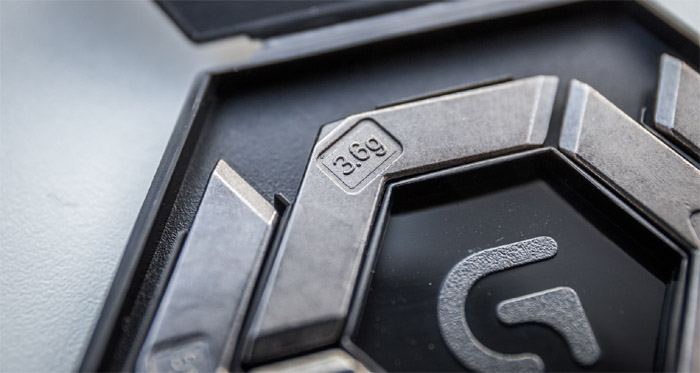 Only the huge weight of the mouse wheel does not feel optimal: because of that weight the mouse sometimes moves when using the wheel, which does not really help the precision of the mouse. Maybe “less is more” would’ve been a good choice here by using a plastic wheel.

My expectations for the G502 were quite high with all the hype surrounding that mouse – and all of them have been fulfilled. Excellent features, high-quality materials and a fitting design concept paired with superior ergonomics catapult the G502 into the elusive group of the best gaming mice 2016. All these excellent features heavily outweigh smaller drawbacks like the mouse wheel or the hard plastic surface on the bottom of the mouse. For us the Logitech G502 is one of the best gaming mice you can buy in 2016!